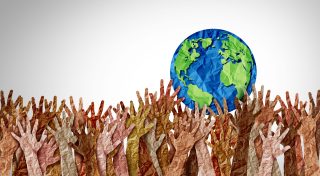 The war on Ukraine is a stark reminder to the Western world that displacement is not the exclusive fate of people from the Global South. The United Nations High Commissioner for Refugees (UNHCR) estimates that up to 4 million Ukrainians, mostly women and children, could end up being refugees in neighboring European countries. For now, Ukrainian refugees are being welcomed and provided voluntary humanitarian assistance. Only time will tell how long they will remain in the countries where they fled, but the sad reality is that many will stay for a long time, as the average refugee is displaced for 20 years. In the weeks ahead, it will be imperative to provide Ukrainian children and youth with access to education as quickly and seamlessly as possible. Inside Ukraine, UNICEF estimates almost 350,000 children are without access to schools.

Studies of refugees from around the world confirm that families with children view education as one of their highest priorities along with other basic needs. In addition to an acute awareness that their children can only secure their future by earning an education, schooling in the short term is an essential protective measure that helps children heal from the shock of their displacement and trauma and gives them a chance at reintroducing normalcy.

Beyond conflict, climate change and natural disasters have been and will continue to be one of the gravest threats to the disruption of education and student displacement. With estimates of climate change potentially uprooting up to 1 billion people from their homes by 2050, the current emergency-based approach to providing education for children has to evolve. If children remain approximately half of refugee and displaced populations as is currently the case, then existing systems and efforts will fall far short of the capacity to support hundreds of millions more children requiring schooling in their temporary communities. Already, the Norwegian Refugee Council estimates that someone is displaced every second by disaster, meaning an average of 26 million people are displaced by disaster annually. Climate change may accelerate these rates as disasters intensify and become even more frequent. Thus, it is crucial the international community rethink its current funding allocation and adopt new solutions for education on the move.

Host country governments continue to bear the biggest brunt of providing schooling for refugee children from nearby conflict countries with varying degrees of favorable policies and support from the international community. According to UNHCR, 39 percent of all refugees are hosted by five countries (Turkey, Columbia, Uganda, Pakistan, and Germany) only and 85 percent are spread across some of the least developed countries in the world.

International donors have dedicated more funds for education in emergencies. Most notably, in 2016, the international community established Education Cannot Wait (ECW)—a fund which reports to have raised over $1 billion and supported 4.6 million children to date. While this is a substantial improvement, education appeals still receive only 2-4 percent of humanitarian funding and ECW itself continues to have a substantial funding gap.

Whether it is the children of Ukraine, Afghanistan, Syria, or Venezuela, all children deserve the global community’s best effort at securing their education wherever they end up.

Education is not only the human right of every child; it is also the passport to a productive life. The skills children develop through education will protect them from social and economic hardship and help them contribute to a more prosperous economy wherever they live. As the race for attracting young talent escalates, it only makes sense for countries with low population growth and a high need for skills to resettle a higher number of refugee families with school-aged children and to prioritize funding the K-12 education of those who could eventually become their pipeline of skilled immigrants.

With conflict, climate change, and economic migration forcing an ever–increasing number of children and youth to leave their homes behind, it is time to prepare an urgent global education plan with new solutions and partners. Three ideas warrant consideration:

1. Ensure that aid dollars incentivize host countries to accelerate the integration of displaced children into their local education systems. Far too many countries that receive aid are not fully committed to providing education to refugee children.

2. Prepare and support an international corps of teachers equipped to deliver education to displaced children in their host communities and remotely. Teachers in refugee settings do not receive enough support, yet the demands on them are high and unsustainable.

3. Create a 10-year initiative to spur new innovative solutions for delivering education on the move. The funding would provide education institutions, social enterprises, and nongovernmental organizations with the support to developing feasible solutions.

Whether it is the children of Ukraine, Afghanistan, Syria, or Venezuela, all children deserve the global community’s best effort at securing their education wherever they end up. With some ingenuity, modest resources, and openness to trying out new ideas and partnerships, the international community can reach every child with the education she needs.